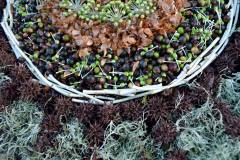 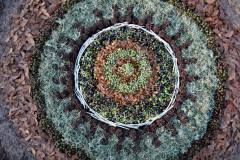 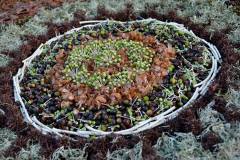 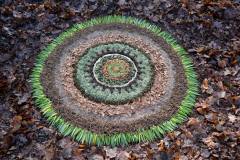 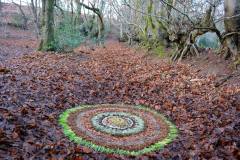 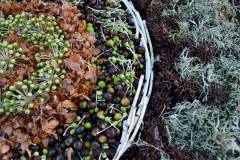 “Being in the flow”
Stowford Woods 21/01/14
As the first of the markers for the coming year approaches, Imbolc, on the 1st Feb, life has reminded me of the importance of faith in the flow with a fantastic little story. On the 1st, Ali and I, are holding a fund-raising event in aid of the Actuar people of Equador.
We will be taking the attendees to Stowford Woods, where an “intended” walk will lead to a full size temporary labyrinth I will be making over the next week. There will then be soup at Knowle Village hall followed by a movement session led by Ali, to some beautiful dance music, mixed by Ali.

And so to the story!
On the other side of the Beech crowned Devon bank, featured in the last of the photo’s below, is a beautiful little field. I had been thinking of making an interactive installation in the woods for the Imbolc event, until the thought occurred to me that I could make an awesome temporary labyrinth in the field. This would require finding who the landowner was and trying to get their permission. All of these thoughts were with me as I made the Mandala below. As I was packing up to go and get Louey from school, my wonderful artist friend Wendy arrived, who only lives a stones throw from the woods. Ah, I thought, that’s handy, I can ask her about the field. It turns out that the farmer who owns the land, Alan, only lives a little way down the lane from Wendy’s house. I resolved to go and see him in the morning. Alan, it turns out, knew who I was. He had seen my calendar at Wendy’s house and remembered delivering a load of logs to the yurt some four or five years ago, and chatting about my art and the beauty of the yurt.

So, good start!
I asked him about the field and if I could make a temporary labyrinth.
No problem, was his reply. I then told him I was planning on using wood chips and was about to talk with the local tree surgeons to see where they dumped their chipping’s. He replied by asking me if I meant like those, and pointed to a mountain of chipping’s behind one of the barns.

I grinned!
I asked if I could bring the car in and take several loads up to the field? He replied, Oh you dont need to do that, I will bring you a couple of grab loads with my tractor and trailer.

How amazing is that!
Or in the words of Hannibal from The A-Team, “Dont you just love it when a plan comes together” (big puff on the stogie)
Ingredients for this one are from the outside in:
Coastal Pigface, Alder Catkins, Pendulem Flag grass seed, Maple and Sycamore keys, Lichen, unknown seed pod, Castor Oil plant stems, Hop petals and Castor Oil seed heads.”